Review : A Little Rain On Thursday by Matt Rubinstein

Obsession takes many forms and will invariably cause wanton destruction to the lives it touches. Matt Rubinstein's mystery thriller A Little Rain On Thursday embodies that obsession in the form of an unavoiddable desire to unlock the secrets from an ancient manuscript.

Jack and Beth are a young couple who have inherited an old deconsecrated church in Sydney after Beth's father died. They have not long moved in when a massive hailstorm destroys the roof which caves in and the ensuing carnage in turn destroys the church floor. Underneath they find a trapdoor to an underground crypt and inside the crypt is an ancient manuscript. Jack happens to work as a translator and is fascinated by the manuscript which is written in an unfamiliar arcane-looking language.

He caught an edge with his fingernail and worked the leaves apart. The parchment complained as he turned it, brittle beneath his fingers. The next pages shimmered like light in the water.

The manuscript and the secret the mysterious text might contain gradually takes over Jack's life although it is imperceptible to begin with.

Meanwhile, while unpacking various belongings within the church Beth finds a forgotten stack of old photographs that her father had kept. Pictures of her as a young girl take her back to her early youth and one day in particular in which she nearly drowned. It's an event she has largely blotted out, but the photos prompt the beginnings of the return of other memories. She also becomes aware of a shadowy figure in some of the photos. The figure could be the same man, a man she doesn't know but whom she senses was important in her life. She's not sure if this shadowy figure represents a good part of her life or an evil part.

The threat from the manuscript lies in the complete domination of Jack's attention towards solving the secrets written inside so much so that everyone and everything around him is ignored. That Beth is going through a personal crisis, a self-awakening, and is crying out for Jack's support has great significance, particularly given the complete absence of acknowledgement on Jacks' part.

Instead he sinks more deeply into a state verging on madness fuelled by paranoia over enemies he thinks are trying to get their hands on his manuscript. The extent of Jack's obsession, I think, is perfectly summed up by the following little extract:

He realized he was speeding, hurrying back to the church. To spend time with the manuscript, to search it for more secrets. He felt abstractly guilty, as if he had been unfaithful. He drove faster.

Somewhere along the way Jack and Beth begin to lose touch with each other. Time becomes confused and so does Jack. The question is, just how strong is Jack's mind and can he overcome the lure of the manuscript.

The story begins strongly but becomes increasingly vague and confused, perhaps mirroring Jack's state of mind and the effect of deep paranoia that was clouding his judgement. The line between fact and fantasy begins to blur as Jack loses himself within the pages of the manuscript as does the certainty over exactly how much progress he really makes on its translation. Momentum slows and paranoia grows and the gulf between Jack and Beth builds to monumental proportions, a fact that Jack barely notices.

Although I can appreciate the powerful imagery evoked by Rubinstein's exceptional turn of phrase, I was neither captured by the plot nor the pace at which the story moved. Through it all, the progress on the document becomes increasingly tiresome rather than more interesting.

A Little Rain on Thursday was the runner-up for the 2001 Australian / Vogel Award, an award for unpublished manuscripts by writers under 35 years of age, entered under the title Vellum. It is full of symbolic beauty, an insidious darkness and dangerous paranoia, but it is also slow to develop and difficult to fathom the ultimate destination.

Be warned, though, just as Jack falls under the spell looking for the hidden meaning behind the arcane script, so too will you be searching for the story's true meaning. 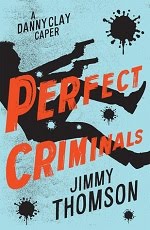