Crime Fiction Down Under 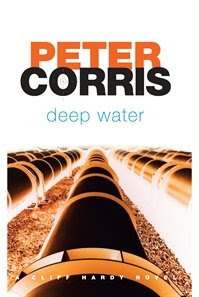 The 34th book in Peter Corris' Cliff Hardy private detective series titled Deep Water was released a couple of weeks ago on 30 March by Allen & Unwin. Here is a series that has stood the test of time developing consistently from the first book (The Dying Trade).

My review, containing some of my thoughts about the book can be found on the Deep Water page at Crime Down Under.

Meanwhile, here is the Media Release that will give you the incentive to go out and get yourself a copy of Deep Water.

However, the similarities stop there as Cliff Hardy gets drawn into a missing person's investigation, after the father of his nurse, Margaret McKinley, goes missing.

The search for renowned geologist, Dr Henry McKinley, takes Hardy behind the scenes at one of Sydney's biggest basin aquifers and ignites the wrath of local big buisness that stand to lose even bigger money if Hardy's discoveries are revealed.

Ignoring the threat to his life from both his health and his enemies, Hardy is determined to uncover the truth no matter how deep the water he finds himself in.

Except from the book.

The following excerpt from Deep Water gives a little bit of an insight into Cliff Hardy and what has made him so popular for so long.


A few days later, installed back in my house and with outstanding correspondence and obligations, mostly financial but also social and medical, dealt with, I called on Hank in his Newtown office to talk over the Henry McKinley matter. I climbed the familiar stairs from King Street bu tnow a fluorescent light made them more negotiable. As I was making my way up a man coming down fast bumped into me and almost knocked me off balance.

I was until you called me sir, I thought. I nodded and he went down, turning at the bottom of the stairs to look back. I signalled to him and went on.