Crime Fiction Down Under

The 2007 Edgar Awards have been held at the Grand Hyatt Hotel, New York City and the winners have been announced:

The Janissary Tree by Jason Goodwin (Farrar, Straus and Giroux)

The Science of Sherlock Holmes: From Baskerville Hall to the Valley of Fearby E.J. Wagner (John Wiley & Sons)

"The Home Front" – Death Do Us Part by Charles Ardai(Hachette Book Group – Little, Brown and Company)

Room One: A Mystery or Two by Andrew Clements (Simon & Schuster Books for Young Readers)

To stock up your TBR mountains you can also check out the full list of nominees.

With 2 popular series on the go at the moment it seems that the title of "Australia's First Lady of Crime" is fitting for Gabrielle Lord. (who's responsible for bestowing such titles, by the way?) April 9 saw the release of the 4th book in the Gemma Lincoln series titled Shattered (pub. Hachette Australia). This is a private investigator / thriller series set in and around Sydney's Eastern Suburbs and is not afraid of tackling some pretty sticky issues.

Shattered tends to focus much more closely on the personal life of Gemma Lincoln as she faces a range of personal crises. Regular characters and friends reappear to lend their assistance while she helps the police with a murder investigation, tracks down a couple of missing women and one runaway girl.

Once again lord delivers a quality thriller with the move towards a more character-driven plot giving the series greater complexity with a refreshing development of several relationships. Oh yearh...and the mystery itself comes together following a carefully arranged list of possible suspects are sorted through, dismissed, reconsidered, accused, arrested, etc. The problem for me - I picked the killer the moment they were introduced into the story, so all the coy hiding of the identity until the great announcement fell a bit flat.

On another little prickle, my hackles rose when I read the blurb on the front cover of my copy which states "Lord is as good as Patricia Cornwell" which, in my opinion, is NOT a compliment.

Anyhoo, definitely another strong entry into a very good series which is comprised of the earlier books: Feeding the Demons, Baby Did A Bad Bad Thing and Spiking the Girl.

For those of you who are wondering about her other series? It's a forensic thriller featuring troubled technician Jack McCann. Death Delights, Lethal Factor and Dirty Weekend are the titles to look out for.

Amongst the Dead - Robert Gott 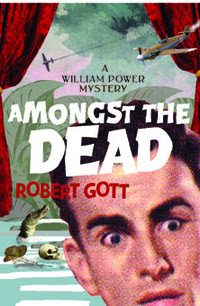 In Good Murder he was unleashed on the unsuspecting Queensland community of Maryborough. In A Thing Of Blood he was back home in Melbourne but no less despised. He is William Power: actor, private inquiry agent and, yes, total dickhead. Robert Gott has sent Power north into the wilds of Australia’s top end for the 3rd mystery in the series titled Amongst the Dead (pub. Scribe Publications).

William Power is a triumph of human incompetence rolled up into a self-satisfied, foppish, prig of a man who has a singularly powerful ability of drawing attention to himself for all the wrong reasons. Set in 1942, and with Australia fearing an imminent Japanese invasion, Amongst the Dead is another delightfully unreliable first person narrative in which Power bumbles his way in and around a multiple murder investigation.

William Power's flaws are many and his complete unawareness of his effect on people is what has made this series so relentlessly entertaining. I recommend you get your hands on the first two books and read them all, but if you can't then a rewarding alternative is to just read Amongst the Dead and have a good laugh.

With some upcoming releases of new books by a few of Australia’s more widely read authors it’s easy to miss the odd book by those who are less noted. Felicity Young is one such overlooked author who is definitely a star on the rise and won’t remain in relative obscurity for much longer, particularly when word gets out about An Easeful Death (pub. Fremantle Arts Centre Press).

An Easeful Death was published in late March and is Young’s second novel following her 2005 debut with A Certain Malice (pub. Crème de la Crime). It's a tightly plotted police procedural thriller set in Perth and featuring DS Stevie Hooper of the Serious Crime Squad.

The attention is immediately grabbed by a complex group of characters making up the Perth SCS all working on one of the more bizarre murder scenes you’d come across.
Young also achieves something that many authors find very difficult. She manages to set up an array of plausible suspects who all come under close scrutiny as possible killers without ever giving away the identity until she’s well and truly ready. I reckon this is an under-rated aspect of good mysteries, but Felicity achieved it with style.

This is definitely a quality book, one to look out for, and believe me Felicity Young is also a name to watch out for.

The 3rd issue of The Outpost, containing another 6 Australian crime short stories has just been released. Once again an eclectic line-up of stories have been gathered to provide some fine reading with a couple of detective stories, a chiller and some stomach churning twists.

Something Out of the Ordinary by Kerry Ashwin
Cold Facts by R.T. Hag
Alison's Folly by Ann Lax
The 24 Hour Affair by Malcolm Reid
Finding Hao Ling by Rani Milne

The Stripping Dick Is Back 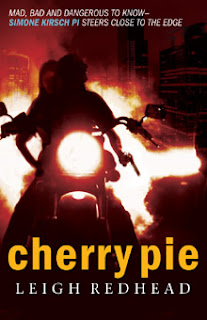 Once again Kirsch throws herself into her work with alacrity and what she lacks in experience she makes up with street smarts and plenty of front. I'm only half-way through the book to this point and so far it has raced along at an incredible rate with a missing person providing initial impetus that promises to blossom into a much more devious and complex thriller.

A detective thriller with a bit of a difference is what you're in for here and Simone Kirsch sits very comfortably among more widely known characters like Carlotta Carlyle, V.I. Warshawski and Tess Monaghan.

My advice to you is, if you haven't read Peepshow and Rubdown yet, do so and you'll be well primed for Cherry Pie.

My further advice -- and this is purely for your own research purposes -- visit your local strip joint and familiarise yourself with G-strings and pasties.